THE Wilmette Block Party festivities, which are being presented by North Shore Community Bank, a Wintrust Community Bank, will kick off at 11:00 a.m. and include the following:

The day is packed with musical entertainment including the following performances:

In addition, there will be tons of family activities available in the Kid’s Zone open from 11:00 a.m. to 3:00 p.m. along with great food and beverage options.

This event is the culmination of a year of celebrations and a great way to commemorate Wilmette’s 150th birthday with family, friends, and neighbors.  Thank you to all of our many Sesquicentennial sponsors, including Oak Sponsors, Canning and Canning LLC and Rotary Club of Wilmette Harbor and Birch Sponsor, CIBC.

For more information on the Village’s Sesquicentennial, including Wilmette History, ways to get involved, and other upcoming events, visit www.wilmette150.org. 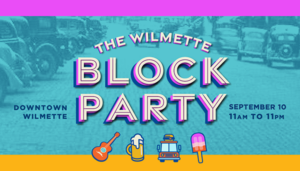