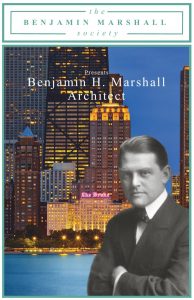 The Wilmette Historical Museum will show the new documentary film on the extraordinary life and legacy of visionary Chicago architect and Wilmette resident Benjamin Marshall.  A representative from the Benjamin Marshall Society will be on hand to introduce the film as well as lead a conversation after the screening. Benjamin Marshall was responsible for the city’s most iconic hotels and addresses, including the Blackstone Hotel, South Shore Community Center, Drake Hotel, Edgewater Beach Apartments and most of East Lake Shore Drive, to name a few. Amid the grandeur and elegance of his work was a fast-paced, celebrity lifestyle that included Hollywood movie stars and royalty. With interviews from historians, architects, Marshall’s family and Bill Kurtis, the film uses sweeping footage of the city, historical photos, and home movies from Marshall’s world tour to introduce viewers to the man behind the iconic landmarks.