These personnel are also members of the MABAS Division 3 Technical Rescue Team, which is one of only a few state-recognized response teams that can be deployed both within the North Shore or anywhere throughout the State of Illinois.  The MABAS 3 TRT team’s equipment inventory ranges from high tech rappelling gear to hydraulic and air shoring systems which are deployed within the team’s rescue squad (Rescue 3) and support vehicles.  Rescue 3 rotates on a monthly basis throughout MABAS Division 3 fire departments and can be deployed rapidly whenever such need exists. 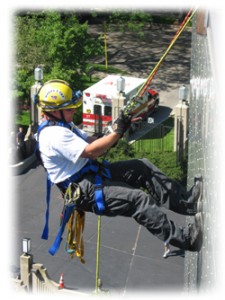